Can you find what’s common between these two print ads? 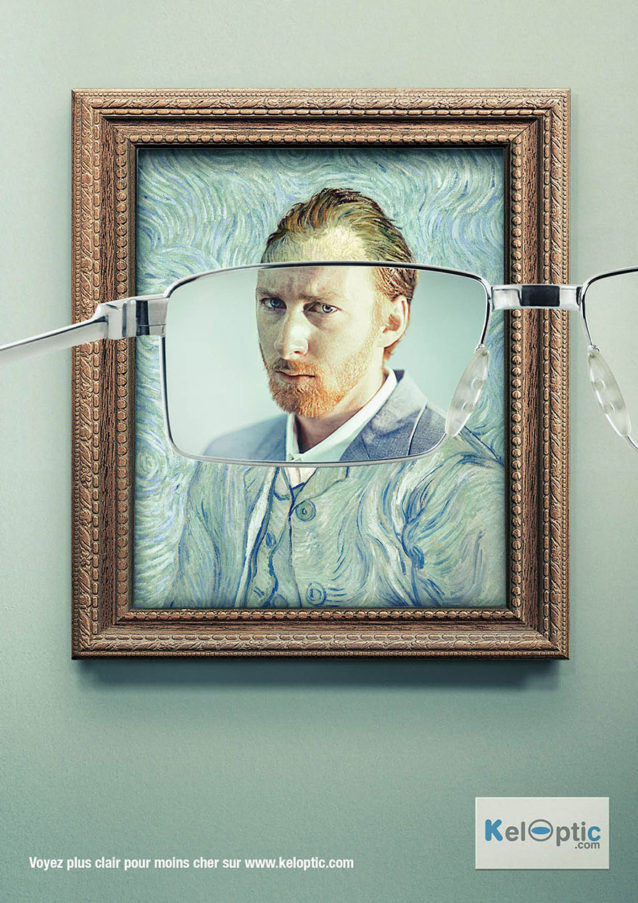 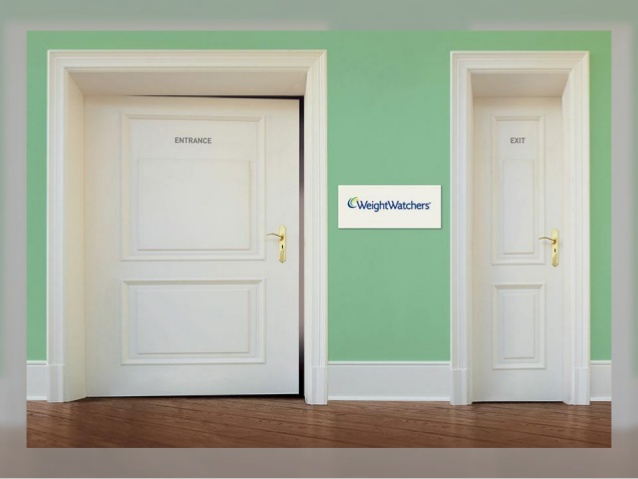 Both advertisements seem to use a similar formula to bring out the benefits of their product/service. They juxtapose a before and after picture – while positioning their product as the bridge for getting from before to after.

In the first ad, bad eyesight is depicted by the blurred vision of the painting. Next, Van Gogh’s face is seen clearly through a lens, which portrays the benefits of using corrective lenses.

The second ad from WeightWatchers depicts the hardships of being overweight by using a wide entrance door – something which every obese person can relate to. On the other hand, the narrow exit door represents the positive outcomes of losing weight. And, the “Weight Watchers” logo is placed perfectly in between to emphasize key to the transformation from before to after.

It is not just these two ads, but Madison Avenue churns out hundreds of such ads year after year. The common thread is that they are modeled along a popular copywriting technique – the Before-After-Bridge or the BAB technique.

What is ‘Before-After-Bridge’ Copywriting Technique?

Before-After-Bridge (or) BAB, is a copywriting technique that revolves around the basic idea of getting someone from a bad place to a better place with your help. It is designed to make your product/service appeal to the wants and needs of your reader and compel them to take the necessary action. BAB helps you portray the advantages and benefits of your product, which helps you write benefit-focused copies.

As the name suggests, it has three parts:

Part 1: Before – The Bleak Picture:

First, you start off by telling the reader how relevant pain points are affecting their current situation. Paint a bleak picture of their current world so that the reader can realize the problems that they are facing.

For a busy sales rep, it is always tough to find time to enter data into the CRM and keep contact data up to date.

Part 2: After – The Promised Land:

Next, tell them how their world would be if these problems didn’t exist – The Promised Land. You need to help them see the difference between the two worlds, explain to them what benefits they will be reaping from this world.

Imagine, a CRM that requires no data entry and automatically updates itself, so you can focus on closing more deals.

At the end, provide them with a path; a solution to help the reader move from Before to After. A bridge between two worlds or you could even say, a path to a better place, like The Yellow Brick Road. Your product/service acts as the Bridge that will guide them.

This is the power of X.io a CRM built to make sales professionals more productive.

How to Write Cold Emails using The BAB Technique:

Here’s how you can implement the BAB framework into your cold emails:

Begin by explaining to them their current world and how the pain points/problems are affecting them. Your goal here should be to remind them of the pain they are going through and get them to acknowledge that it is quite real.

Just saw your query on Quora, about your low conversion rates in your cold email outreach campaigns. So, it is evident that you are losing potential customers and leads which is bad for business.

You can also go about asking a relevant question on a pain point that they might be facing. By asking a question you’re getting the prospect to imagine how bad the situation is if that pain point/problem exists. This fear acts as a motivator, increasing your chances of a response.

Are you finding it tough to find more leads and prospects for your sales team?

Here, go about telling them about a prosperous future where these pain points/problems don’t exist – provide them with a happy picture. The After section is designed to create a desire.

While describing how the world would be different if these problems didn’t exist, you should also mention the benefits the prospect will reap from that world.

What if I told you that there is a tool that helps you with your cold email campaigns? A tool that can help you create personalized one-to-one cold emails, reach out to prospects with automated follow-ups, track email opens, clicks and replies, identify and build a database a prospects and more. Overall helping you improve your conversion rates.

To strengthen your Bridge statement, you can state facts and proofs. People have more faith if you can back up your statements and promises with facts and acquired proofs. Your Bridge can sometimes be combined with your Call To Action (CTA) statement to get a more crisp and clear ending to your cold email.

If you are willing to give us 15 minutes, I can show you how we achieved a 45% response rate for a sample size of 80 prospects in one of our cold email campaigns.

Here is a cold email example that uses the BAB framework: 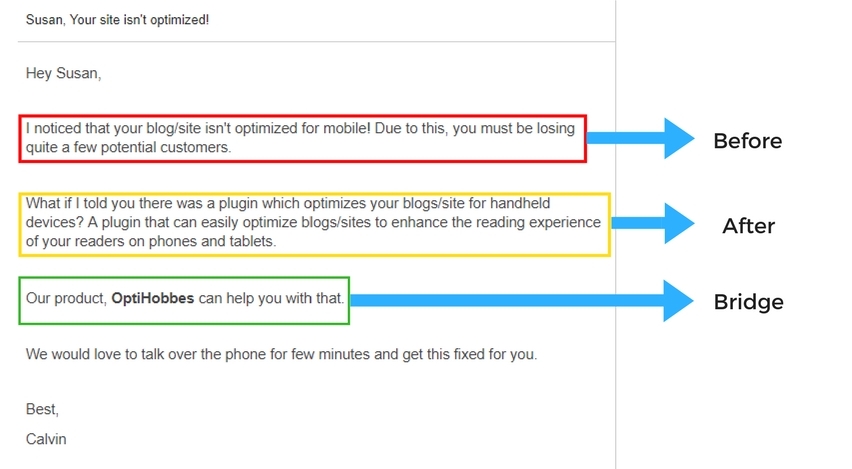 Why does BAB Technique work for Cold Emails?

The BAB technique helps avoid the most common pitfall of most sales email messaging. Features vs Benefits. Instead of talking about the features that you offer, BAB helps you to remain focused on the benefits.

For eg: Instead of writing about a “CRM that syncs with your email”, the messaging of the cold email can remain focus on “a CRM that saves sales reps hours of manual labor” – classic features vs benefits approach.

Additionally, the BAB technique puts the prospect front and center and makes her the Hero of the narrative. Rather than talk about yourself and your product and how you can help, the BAB technique flips the script and stays focused on the prospect, her current world/ pain and how this world can be transformed for the better.

This dual impact of, focusing on benefits and grounding the messaging in prospect’s world makes this a killer advertising technique to write the perfect cold email.

How to Write a Demo Follow-up Email (7 Bonus Templates)

Leave a Voicemail That Gets Responses [12 Free Sample Voicemail Scripts]