If only sales reps could close deals at a rapid-fire pace, that would have been a fact worth quoting!

Unfortunately, closing deals is a time-consuming ordeal. But if there is one thing that you could to improve this, it is segregating the bad apples from the good ones in your sales pipeline. And that is exactly what ‘Lead Qualification’ delivers. It helps the sales reps filter out the low-quality leads and focus on leads that can be closed faster.

Lead qualification is important for every sales team because, at the end of the day, it is not going to matter how good your product is or how you killed it in the demo if you are dealing with a prospect who is simply not going to buy from you. Or like Joey Tribbiani would put it, it is all a moo-point!

There are several methods to qualify a lead but we are going to focus on one of the oldest methods of sales qualification out there – BANT.

Before BANT framework was established, sales reps pursued every lead in their sales pipeline, resulting in a lot of time being wasted.

To tackle this, IBM came up with BANT qualification framework, which ensured that salespeople spend their time working with prospects who were most likely to become customers.

WIth BANT framework, a sales rep asks a series of questions to the prospects, focusing on their Budget, Authority, Need and Time.

BANT covers the major governing factors which help to identify a qualified lead in the form of its 4 elements: Budget, Authority, Need, and Timeline. A lead is considered viable if it meets at least 3 of the 4 BANT criteria.

Budget is crucial in sales qualification because your prospect’s purchase decision hinges on their ability to afford your product. Sometimes even if your prospect likes your product, they may have to pass up on it, if it exceeds their budget.

Authority is the ultimate decision-making person(s), who has the final say in whether your product is to be purchased or not. Imagine spending two weeks with a prospect, sending them emails, following up with them, convincing them about the product, explaining to them what value they will reap from it only to be met with “I’ll ask my boss and get back to you” response at the end – that’s an absolute waste of time.

Your prospect may have the budget and the authority to sign off the deal, but that is of no good if they do not have a need for your product. Pursuing them further would just be like, for the lack of a better analogy, pestering a deaf person to buy a radio.

If the prospect needs your product, then when do they need it by? Each prospect operates on their own timeline. Some may need your service right away, while some may earmark it for the future. So, having a general knowledge of when they need your product can help you decide which ones are high-priority and which can be put off for later.

When IBM first introduced BANT, it was an instant favorite among salespeople, for several reasons:

Here is a classic example of BANT sales qualification:

Sales Rep: Do you have the necessary budget to accommodate us?

Prospect: Yes, that’s not a problem.

Sales Rep: Will you be the one using the product?

Prospect: No. My sales team will be using it.

Sales Rep: And, you need our product because you have an issue with lead generation?

Sales Rep: By when do you want the solution in place?

While this approach was ideal, if you are still using BANT the same way it was done half a century ago, chances are that it will not work out. Not because BANT has lost its effectiveness but because it is not implemented by the sales reps to align with the changes in the modern day sales process.

This is not the 60s anymore and a lot has changed in the buying behavior of companies and even more has changed in the vendor landscape. With more millennials entering the workplace and other trends like Consumerization of IT and democratization of the purchase process it is important for sales professionals to change the way they qualify and sell to prospects.

What is holding back BANT from being an effective sales qualification technique in the present day?

a) The Rigid Approach

One of the reasons why BANT fails to be effective is the rigidity in how it is implemented. Sales reps pursue prospects by asking a set of questions based on the four components.

While sales qualification is indeed about asking questions, they shouldn’t feel interrogative but be interactive. The focus should be to build a genuine conversation and try to understand the prospect.

b) Budget, Authority, Need and Time – The degree of importance has changed

BANT’s tremendous success as a lead qualifying framework was due to how it got the degree of importance of its four components just perfect. The questions were framed such that the priority was given to Budget, followed by Authority, Need and Time.

However, the sales process has come a long way since then.

For one, budgets are no longer the focal point, it is all about your prospects needs. Decisions are no longer made by a single executive. It is not about affordability but it is about the ROI.

These changes call for a change in the degree of importance to the four components with emphasis on Need followed by Authority, Budget and Time.

Need is arguably the most important aspect in BANT.

Unless and until the prospects see a benefit in using your product, they are not going to buy it. So it is pointless pushing your product to people who don’t need it.

As a sales rep, your objective in this phase is, to understand the situation of the prospect and see if you can help him. If you know that it becomes much easier for you to demonstrate how your product can benefit their business.

The structure of Authority has seen a considerable evolution over the years. In the past, many companies followed a Top-down approach, with the CIO or a single executive making the purchase decision.

Today, the decision making in companies is increasingly democratic. Rather than purchase a product and hand it to the employees, companies take the suggestions of end users. Products such as Dropbox and Slack have grown tremendously using a bottom-up, “end-user first” route, rather than being driven by top management.

It is a bottom-up approach where key decisions are taken as a collective, with the top executives discussing with the actual users of technology before making a purchase decision. 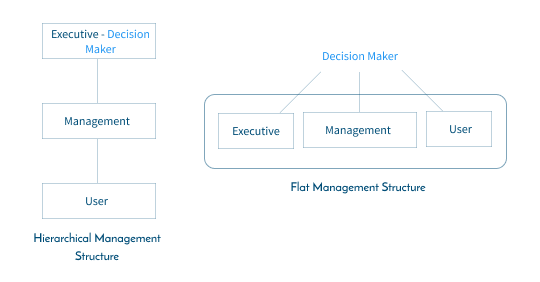 As a sales rep, you have to find out how their decision-making flows and who all will be involved in the deal. Once you determine the number of people involved in the project, you can plan whom to focus at different stages of the sales process. (Ex. Demos should involve the actual users of the product while negotiating terms should involve managers and so on).

In the past, software licenses cost a fortune. So it made sense to focus on the budget. But in today’s world, thousands of SaaS products are available at affordable prices, the budget takes less prominence.

Purchasing a software product (especially SaaS) is often no longer a cap-ex heavy venture. Investing in a product has become an operational expense today. The key financial metric to demonstrate is Return on Investment. 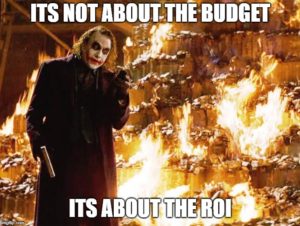 Qualification questions based on time usually happen during the latter stages of the qualification process. By this stage, the prospect is convinced that the product you have is what they want and is indeed worth investing in it. The last check is the timeline, which could easily be sorted out.

Here, the goal of a sales rep is to understand how soon the prospect is willing to act on their interest. This helps in managing your sales pipeline in a better way.

BANT was a breakthrough in the process of sales. It’s status as one of the best sales qualification frameworks even today, five decades after it was first introduced is a testament to its success.

However, If you are BANTING exactly like how it was done 50 years ago, it is bound to be ineffective.

The key is to reinvent BANT to fit into the modern sales process, which lies in the ability of the salesperson – to consistently innovate and adapt to the changing trends.

So you think you have what it takes to BANT your way to sales glory?

7 Reasons Why a Sales Pitch Fails (+ Lessons From Sales Legends)

Upsell Without Being Pushy [9 Best Upselling Strategies for SaaS]

How To Build a High-Velocity Sales Team

30 Funny Memes All Salespeople Can Relate To in 2022

Desk-bound or door-to-door? A look at inside sales vs outside sales