Let’s make one thing very clear before we begin: Cold calling is indeed here to stay.

Check this out: Research that analyzed over 12,000 consumers and 150 billion phone calls worldwide notes that businesses have turned to voice calling as the preferred communication channel for various interactions, including for closing sales. Also, customers prefer receiving calls from businesses more than emails, the research adds.

As a salesperson, making cold calls every day is part of your job to book meetings. So, how do you get good at cold calling?

Here, we look at 31 cold calling statistics along with data-backed tips for you to boost your cold calling chops. If you’re wondering about the number of cold calls you should make in a day, the best time to make these calls, and some best practices to make successful cold calls, keep reading. We also feature stats for other sales calls like discovery and demo calls and on handling objections.

2. How many cold call attempts should I make?

Salespeople need to make as many as 8 cold call attempts on average to reach a single prospect.
Cold calling is by no means an easy task, especially when you have to spend your time making at least eight calls for the prospect to even pick up the phone. While it is worth the effort, salespeople must stick to the 3 P’s — patience, perseverance, and persistence — while cold calling.

3. How many cold calls should I make in a day?

A study found that sales reps in B2B tech should average at least 60 calls per day as a benchmark to improve the chances of booking meetings, but they manage to make only 35 calls per day, which is only around half of the benchmark.

As we saw earlier, it takes around 8 cold call attempts to reach a prospect. By making 60 calls every day or 300 calls in a week, you have a chance to reach around 38 prospects in a week.

Pro tip: Use a cold calling tool to organize your 60 cold calls in a day efficiently. The tool will help you in scheduling your daily calls, measure call metrics, and prioritize calls based on the extent of the prospect’s engagement. What’s more, you can also automate tasks like scheduling appointments, follow-ups, call recording, note-taking, and sending text/email messages to leads following the call, which would be highly time-consuming without cold-calling software.

If you want to make 100 cold calls, you could do that depending on what your previous open rate and talk time for each call have been like. However, with the above-mentioned time of 4 minutes and 50 seconds per cold call, it might take up all of your working hours.

So, it’s better to place calls to a small number of highly qualified prospects (around 30 or 40 prospects), in which case you can block 1 hour in the morning and 1 hour in the evening to call them twice. This is not only a viable option as opposed to making 100 cold calls, but also has a higher chance of booking meetings.

Benchmarks for how to talk during a cold call

1. Asking “How have you been?” during the cold call increases the success rate by 6.6x

As per this analysis, salespeople who open their cold calls with “How have you been?” see their success rate of cold calling go up by 6.6 times, as this opening line was found to be acting as a pattern interrupt that would keep the conversation with the prospects going.

2. Salespeople increase the chance of booking meetings in a cold call by using collaborative language like ‘our’ (55% increase) and ‘we’ (35% increase)

Coming across as a team player is essential in making that first impression. So, pepper your outbound calling script with collaborative language like  ‘we’, ‘our’, ‘ourselves’, and ‘us’.

3. Opening with “Did I catch you at a bad time?” makes you 40% less likely to book a meeting

While this opener is widely recommended by sales books, an analysis shows that it does the opposite of what it is intended to do — cold calls that opened with this line had a success rate of less than one percent.

4. Salespeople who give their reason for calling are 2.1x more successful in booking meetings

Stating your reason for calling will help the prospect overcome objections like who you are, what company you are from, and why you are calling them.

5. In successful sales calls, salespeople do slightly more talking (55%) than the prospect (45%)

In the initial stages, having a higher talk-to-listen ratio is better as it reduces the effort of the prospects, who are unsure about what it is that you are selling, thereby increasing your chances of booking a meeting.

6. Chances of having conversations with prospects in the first attempt of cold calling increase by 50% on Wednesdays

Wednesday is found to be the best day of the week to make cold calls. When compared to Monday or Tuesday, the possibility of your prospect attending your call in the first call attempt is higher by 50%. However, do not call your prospects on Mondays and the second half of Fridays as the prospects are least likely to attend cold calls at the beginning and end of the work week.

During the demo, make sure that the presentation is targeted and allows scope for more conversations, which increases the possibility of closing the deal.

In a typical sales conversation, the average talking speed is 173 words per minute, as per this analysis. So, good salespeople do not get flustered and speed up their responses too much while dealing with objections.

9. Successful conversations with prospects have silent periods that last for 8 to 10 percent of the total call time

It doesn’t have to be all talk, talk, talk for sales reps. Just the right amount of silence during your cold call could do wonders for your success rates. However, don’t be too silent as letting silence dominate your conversation could be a deal-breaker.

10. In cold calls, top sales reps have their monologues for only 12 seconds on average

This means that the monologue of top-performing sales reps would contain only about 35 words at a stretch of 12 seconds (if we take the average speaking rate to be 173 words per minute).  While we noted earlier that sales reps talking a little more than prospects is good, be careful to not end up going on long rambles during the cold call.

Top cold calling conversation stats you should know about

1.  It takes 12.73 dials to connect when calling a list of prospects with direct phone numbers, and 18.83 dials when calling switchboard numbers

Connecting to a prospect while dialing using switchboard numbers takes 67% more dials than dialing using direct numbers. Direct dialing will also help you increase your conversion rates, as you can circumvent the gatekeepers and reach the decision-makers directly.

This data refutes claims by the naysayers that C-level executives do not prefer cold calling, as more than half of them are willing to answer cold calls. While reaching out to these top decision-makers, research by checking their websites, LinkedIn posts, and press coverage to confirm whether cold calling could be a suitable outreach method. This research will also help you in making a good first impression.

B2B cold calling statistics state making 35 calls per day on average — which is less than the benchmark of 60 calls per day — takes around 55 minutes for the sales reps surveyed in this study.

This finding is a reality check for salespeople as it impacts the sales volume, sales velocity, and productivity of businesses. So, ensure that you mention the reason for the call while calling your prospects.

5. 70% of sellers connect with buyers and generate meetings using the phone

As per this analysis, 17% of buyers who don’t prefer voicemails, receive voicemails from sales representatives. In such cases, having a well-prepared sales voicemail script for your prospecting calls will help you book more meetings.

7. Each sales rep leaves 70 voicemails per day on average and spends 25 hours every month on voicemails

This means a sales team of 50 sales reps might spend 1,250 hours per month just leaving voicemails. To save time, automate this process by using cold calling software to leave personalized and pre-recorded voicemails with one click and revise the voicemail script once or twice a month as needed.

8. The estimated conversion rate for cold calls is around 6.3%

While this seems to be quite low, click-through rates for cold emails hover around 0.5%. Also, cold calls are better when it comes to building rapport with the prospects and identifying their needs/problems – which fares better if you’re focusing on a personal selling strategy.

9. Salespeople responding to leads within the first 5 minutes see a 100x increase in contact rates

This data illustrates how crucial a quick follow-up is. By optimizing response times using tools like auto-dialers and lead capturing software, your chances of closing deals with the existing leads will improve.

10. Ask between 11 to 14 targeted questions to prospects during a discovery call

This analysis has found that asking more than 14 questions has a diminishing rate of return and asking fewer than 11 questions might not allow you to cover enough ground and get all the required information during the discovery call.

11. Focus only on 3 to 4 customer problems during the discovery call

The targeted questions must focus only on 3 or 4 problems as looking at more than 4 problems might spread your prospect’s focus too thin.

12. Unlike cold calls, salespeople talk a little less – only 46% of the call duration – than prospects (54%) in a discovery call

The talk-to-listen ratio becomes inverted during discovery calls as this data shows — top-performing sales reps listen more than talk during the discovery call.

This shows that you need to keep their product demos svelte and without any fluff to hold the prospect’s attention.

14. Prospect’s interest dips after 9 minutes during a demo call

Data in this study shows that the prospect’s interest dips roughly after the nine-minute mark and unsuccessful deals had presentations that lasted 11.4 minutes on average. So, you can divide the call duration into segments that each last 9 minutes or less. After each segment, you can switch things up like a new speaker or a display to regain the prospect’s attention.

This analysis also says that only 8% of salespeople make the fifth follow-up call. If this 80% of prospects have said “no” four times before saying “yes” the fifth time, perhaps 8% of salespeople are getting 80% of the sales! So, be tenacious and ensure relentless follow-ups.

Unsuccessful reps might feel agitated after receiving objections and tend to interrupt customers during the call. Keep your cool while handling objections, always.

17. 54.3% of top-performing salespeople follow up with questions after listening to objections

By asking questions, salespeople can clarify the prospect’s objections raised during the call to provide them with the right solution. You can use methods like the mirroring tactic, where you repeat the last few words of your buyer’s sentence and frame it as a question to get them to elaborate on the objection.

To quote from the report ‘5 Sales Prospecting Myths Debunked’ prepared by Rain Group Center for Sales Research, “Cold calling is not dead, it just has the company of other tactics.”

For cold calling to be successful today, it should no longer be done in isolation. Combine it with other outreach techniques like cold emailing, LinkedIn messaging and sending SMSes to get the most out of your outbound calling efforts.

If done well, cold calling is still one of the most effective outreach tools for sales professionals.

The data-backed suggestions that we have gathered for you here will help you in tailoring your cold calling strategy. However, keep in mind that a particular strategy will remain successful only for a  certain time period as soon enough, everyone replicates the strategy and it will become stale.

So, take the information you gather from books, LinkedIn posts, or blogs with a pinch of salt and keep experimenting with different strategies regularly. Go ahead, pick up that phone and book those meetings now.

How to Write a Demo Follow-up Email (7 Bonus Templates)

Leave a Voicemail That Gets Responses [12 Free Sample Voicemail Scripts] 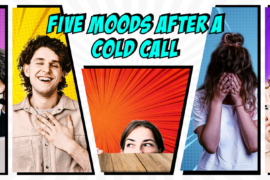