This article can help you double your sales in 30 days. We promise you that. Do you believe us?

What if we told you that companies like Kissmetrics, Groove, ConvertKit and SumoMe used the same 5 tactics based on psychology that we have outlined below to grow their SaaS business?

Chances are, we now have your attention and have established much greater credibility. What we just did was to gently manipulate you using Social Proof, a.k.a the Bandwagon effect in the language of psychology.

From used car salesmen to the more suave modern marketer, psychology has played an important role in selling more. Understanding the triggers which can nudge prospects favorably and move them closer to a sale can make a big difference in closing more deals.

In a SaaS business, several decisions such as your pricing strategy, your website copy, your free trial duration, your onboarding strategy, and email nurturing campaign can all draw upon the following theories. A few minor tweaks here and there can create a big difference in the growth of your SaaS business.

When a product or a service is limited in availability or perceived to be, it becomes attractive and grabs your attention. This phenomenon is called ‘Scarcity’, one of Robert Cialdini’s principles. This psychology principle is based on the simple concept of economics – supply & demand. The more rare the product, service, or opportunity, the more valuable it is.

Bear in mind that scarcity is one of the most heavily used sales tactics of all time. Every single sales person has tried that trick of “Only 3 rooms left at this price!” or “Limited seats in this webinar”. While scarcity does work, in today’s age you need to use it wisely and keep it authentic at the same time.

For example here is how Prodpad uses the scarcity principle without being too pushy or desperate.

When Prodpad reduced their free trial period from 30 days to 14 days, they found that conversions automatically doubled. Users valued their trial period more, completed key tasks within days and became customers much faster.

Prodpad didn’t stop here. They went one step forward and brought it down to 7 days.

And added gamification around this to incent prospects to do more during the free trial period. Prodpad created a “Magically extending free trial”.

SumoMe also uses this principle heavily in a lot of email copy. “Only 6 hrs left” creates a sense of urgency. 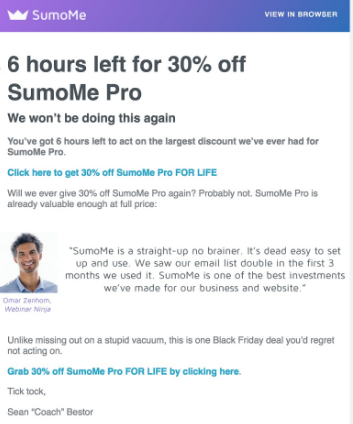 Here is the decoy effect in simple words. When you offer your prospects a third option – “The Decoy” which is strategically priced, you can convince your customers to choose the more expensive of the other two options.

In a study at Duke University, Professor Joel Huber asked subjects if they wanted to eat at

The choice was quality vs. convenience and subjects had a hard time deciding.

Then, Huber introduced a third choice (the decoy)

It turns out that this additional choice had the effect of making the 5 star restaurant a lot more attractive and tilted the scales in a substantial manner.

Well, in case you are already thinking about your pricing plan… you are thinking in the right direction.

If you have 2 options in your SaaS pricing page and find that a majority of your customers pick the cheaper plan, then add a third plan, such that your two most expensive plans are almost similar. Sit back and watch the uptick in your ACV. 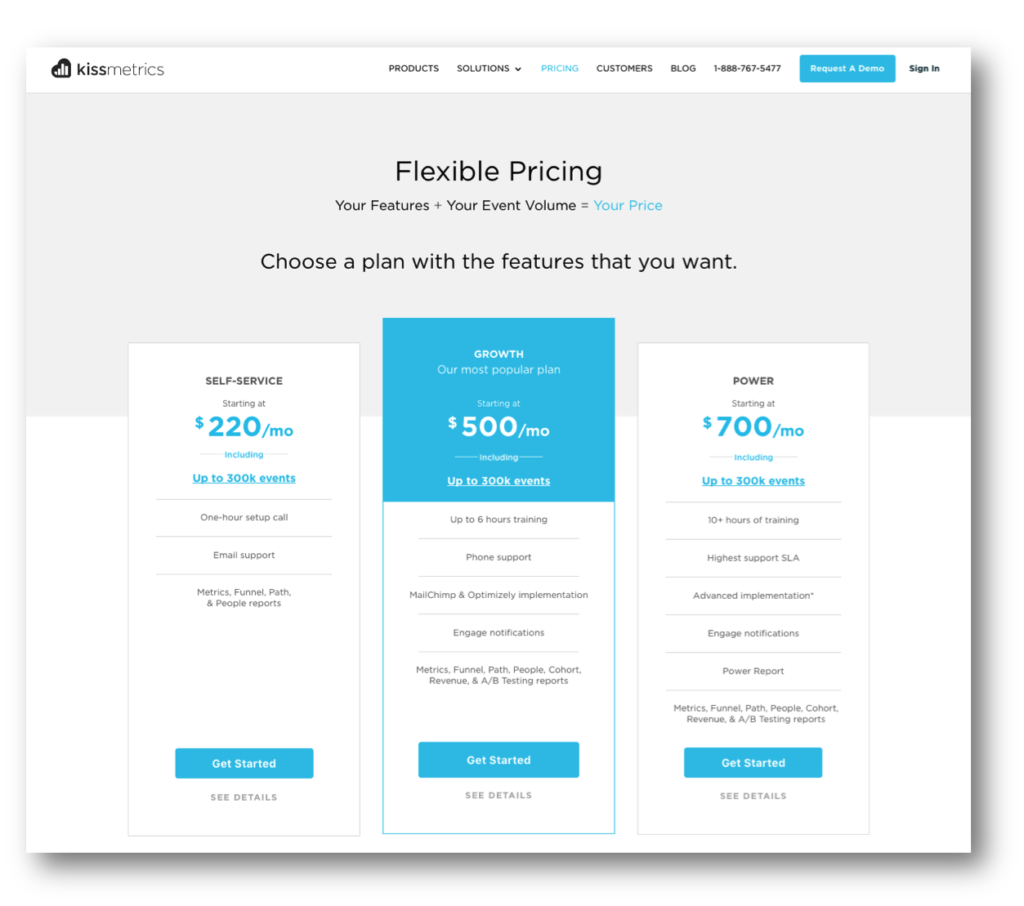 Take a look at the KissMetrics pricing above. The Growth and Power plans look almost similar – in terms of features. And the Power plan looks way too expensive to justify the limited incremental benefits. We haven’t checked with Hiten, but would be willing to bet that the Power plan is actually a decoy that makes the Growth plan look like the prettiest lass in the ball.

Get someone to agree to a small request. It improves the chances that they will agree to a second, larger request.

They first asked subjects to display a small sticker in the window of their home or car, promoting safe driving. This was a simple request.

Then, they asked respondents for a larger request — to display a billboard sign in their yard with the same message. Shockingly, many of the subjects responded positively to the second request.

Lead nurturing in SaaS pretty much works on the Foot in the Door principle.

The idea is to get a lead to sign up for your blog first. At this stage, you may only collect an email address. Then nurture them to download a white paper or an e-book. At this stage, you may ask more questions such as name of company, how big the team is, etc. Then again at a subsequent interaction – ask for more details, perhaps a phone number. Until you finally make that big request – would they be interested in signing up/ or attending a demo.

‘How much will you tip the server at the restaurant when he brings your check?’

‘How much will you tip the same server when he brings the check along with a couple of mints?’

According to a study Dr. Robert Cialdini, the diners tip (which is ostensibly based on their perceptions of the service given) jumps by 3.3% with one mint and roughly by 20% with more mints. This is the concept of ‘Reciprocity’ or – if someone does something of value to you then you will be naturally obliged to return the favor for them.

Professor Dennis Regan at Cornell University demonstrated the power of reciprocity in his experiment. Subjects were asked to rate paintings at an exhibition along with a partner, who was the assistant of the professor. Every time the assistant was with a subject, he would leave and return a while later. He brought a soft drink for few and nothing for others. In the end, the assistant would request the subjects to buy raffle tickets. Regan concluded that subjects who had received a soft drink were far more likely to purchase tickets, although the value of the ticket was more than the drink.

Implications for SaaS sales: By offering something of value to buyers, you positively influence their likelihood of purchasing from you.

For example, once a user signs up for a free trial on your website, provide an unexpected gift to the user. Say a few extra credits or a waiver on an onboarding cost.

Another example could be: Let’s say you introduce a new feature in your premium pricing tier. Provide this for free to your non-premium tier for a couple of months. Chances are that you may be able to convince them to upgrade their account.

ConvertKit uses this principle to improve conversions in their application. When you signup for the product, you are invited to a webinar and an unexpected 50% off the first month if you join the Webinar. Also, notice the free migration service? 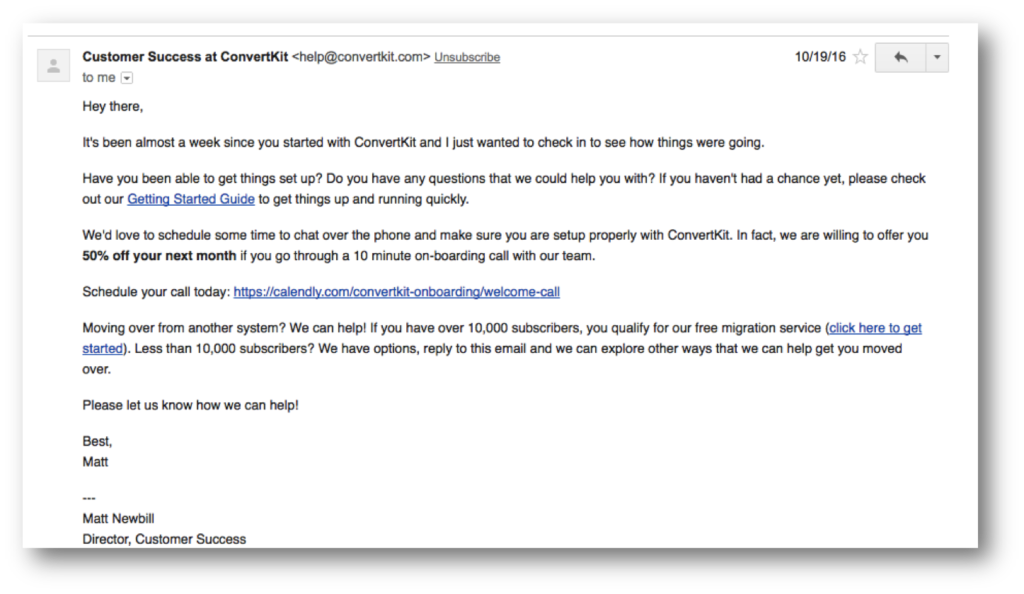 It’s a known tendency to attribute greater accuracy to the opinion of an authority figure (unrelated to its content) and be more influenced by that opinion.

Did you see a TV ad for tooth paste recently? Odds are that you saw a doctor (with a white coat and stethoscope) recommending the benefits of that particular brand.

What is at play here is the attempt to use the Authority Bias.

One way to sell your SaaS product is to establish yourself as the authority in your field. Your blog and content marketing strategy can be used to publish thought leadership articles in your field and establish your brand. If you are an authority on a subject you gain the respect, trust, and confidence of your audience.

7 Reasons Why a Sales Pitch Fails (+ Lessons From Sales Legends)

Upsell Without Being Pushy [9 Best Upselling Strategies for SaaS]

How To Build a High-Velocity Sales Team

30 Funny Memes All Salespeople Can Relate To in 2022

Desk-bound or door-to-door? A look at inside sales vs outside sales