A long time ago in a galaxy far, far away, there may have been lightsabers and Wookies, but the Star Wars franchise isn’t that far, far away from our world. The sci-fi masterpiece has family drama, internal conflicts, and human resilience, just as we do.

And that is the reason why this multi-million-dollar franchise has reached pop culture status — there’s something relatable in the films and characters that everyone can connect to or draw inspiration from.

Since it’s May, we sat down for our yearly Star Wars binge, only to discover that the galaxy far, far away might just have some similarities with the sales world too. Especially when it comes to some iconic quotes.

So here are four Star Wars quotes that fit the Sales life perfectly, based on the scenario.

There is nothing more dreaded than the quota review. And while some days pass by smoothly and successfully, the same can’t be said for the bad days.

The humble SDR knows that the year has its ebbs and flows when it comes to sales numbers, but the SDR manager does not share the same sentiments. So when it’s time to go over your performance and say that you’ve done your best, your SDR Manager’s response is the same as Yoda’s dialogue from The Empire Strikes Back:

It’s been two long months of pursuing your prospect. They’ve even started appearing in your dreams. You have a game plan to push them through the pipeline. This is your moment to shine.

And then, they just vanish.

Getting ghosted hurts more when it’s in Sales. It’s a moment heavy with betrayal — you’ve poured sweat and tears into this deal. How could the prospect just ditch you and disappear? You need to do something to get them back. You need them back, now.

But your Sales Manager tells you to drop the prospect, because they’re not worth the energy. And you listen to the wise words of Anakin Skywalker in Attack of the Clones: “Sometimes we must let go of our pride and do what is requested of us.”

Sometimes, all a prospect needs is a little nudging. After all, we’re playing a long game here, and persistence is key in making sure you close the sale. So sending multiple follow-up emails is just a part of the game.

The end of a productive day feels great. You’ve crushed all your meetings, completed all of your pending tasks, and even prepared a schedule for tomorrow. It’s one of those days where selling feels like second nature, and it feels great. Now the only thing that’s left is—

You’re going to be stuck here until tomorrow. Suddenly, your good spirits have plummeted.

But have no fear. Simply follow the words of Han Solo from A New Hope: “You’re all clear, kid. Now blow this thing and go home!”

The Sales is strong with this one

If it’s the Sith in the Star Wars universe, then it’s targets in the Sales World. There are a hundred similarities between the fantastical wars in the film series and our never-ending battle with our CRMs. But there’s also a wide wondrous world full of opportunity, and that’s what every sales person likes to hear.

So this May the 4, get out there, face those evil targets, draw out your lightsaber, and may the Force be with you!

I like sales because it gives me a dopamine rush: Joel Thomas, SDR at Almabase

Ashley Dees, SDR Manager at Metadata, Reveals How She’s Been at the Top of Her Sales Game for Nearly a Decade 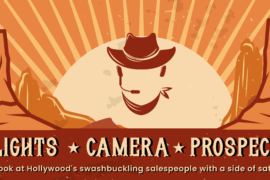 A look at The Good, The Bad, and The Ugly from Hollywood’s Wild West of Sales
How to Write a Demo Follow-up Email (7 Bonus Templates)